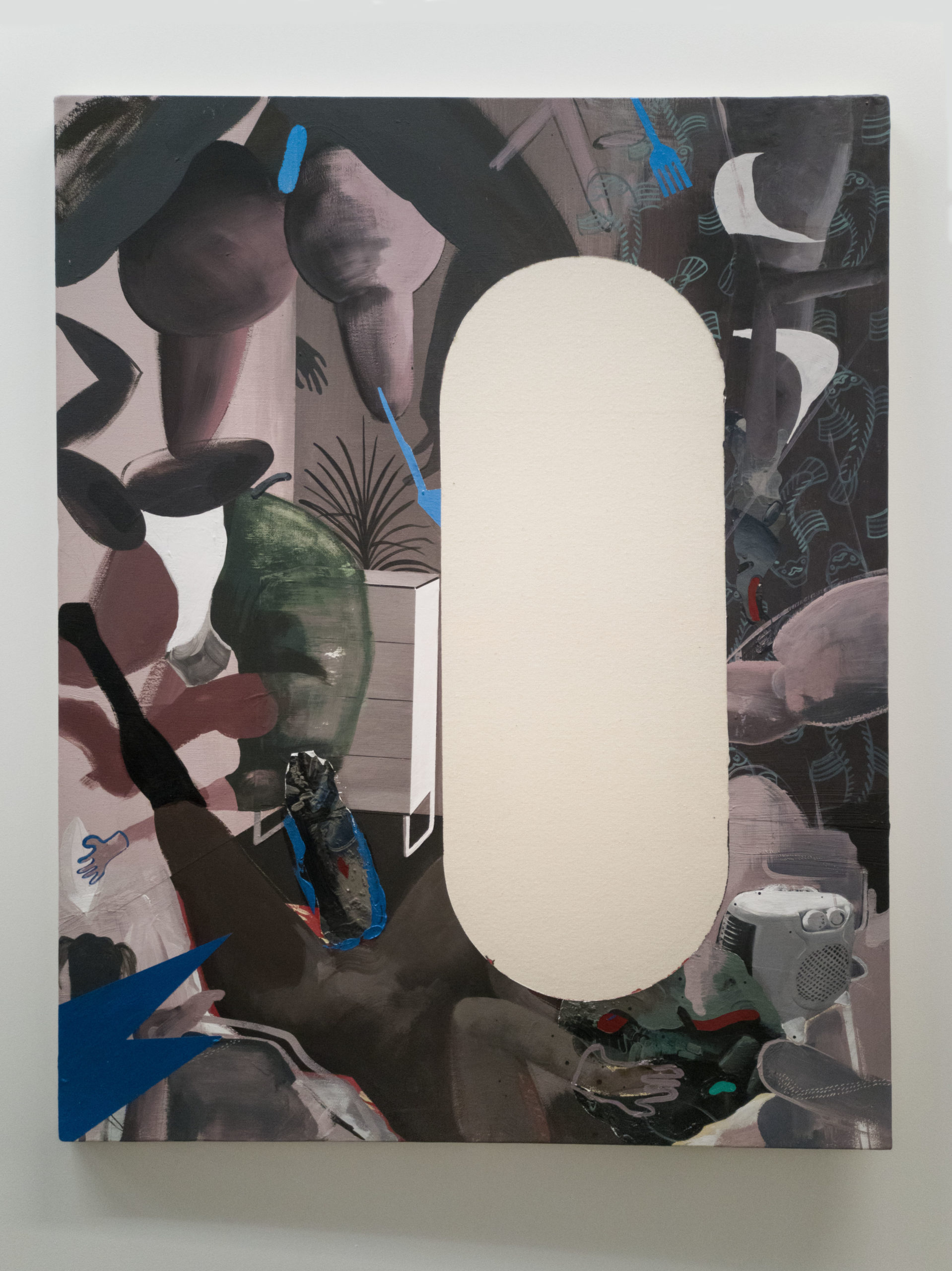 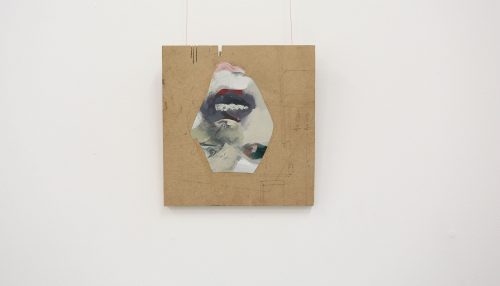 There is a sense of the familiar in the new series of works made by Chidera Ugada for Shoot Festival.  In his studio on an overcast evening in the middle of March, he talks enthusiastically about an obsession with the images he encounters across his hometown of Coventry.  Drawn from discarded newspapers and old magazines, street signs and advertising hoardings, and from countless screens – from mobile phones to bus station monitors – these everyday images occupy him and find their way into his self-described dreamscapes.

Our conversation reflects upon contemporary life in Britain and the ever-increasing bombardment of visual information on citizens. This is no different to anywhere I suppose – a prevalent experience of a global age, and a dominant feature of our interconnected existence.  The places we inhabit are forged and navigated on multiple plains these days, and Ugada talks of reinterpreting and deciphering what he sees as an increasingly complex and layered picture of the world.  Speaking figuratively about the act of regurgitation in his work, he says ‘as an artist, I vomit the world I consume around me’.

Through painting and collage, Ugada’s alternative worldview throws up the remnants of images we may unknowingly have walked by or scrolled through; his works are a heady mix of imagery that verge on the familiar but remain uncanny and elusive.

Morning. Afternoon. Night. (2019) is the title of Ugada’s new series, incorporating three large collages that see the artist move from working on board to canvas.  He is enjoying the challenge of shifting to a less familiar support, and tells me Shoot Festival has provided the impetus and opportunity to push his processes and working methods beyond his comfort zone.  This fearless approach and appetite for discovery is to be admired, and indicates the underlying value of exhibition platforms such as Shoot as catalysts to support early career artists in the development of their practice. 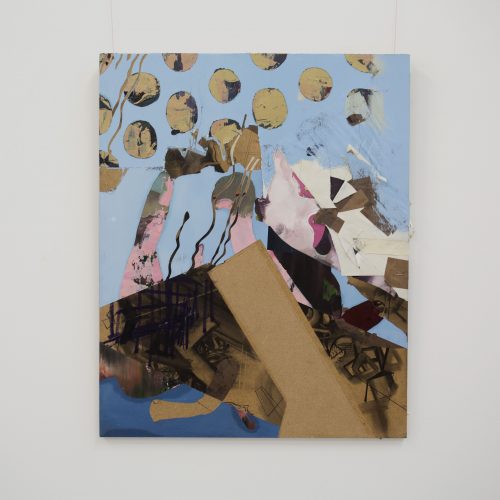 As a Nigerian artist now based in Britain, I ask Ugada what part his heritage plays in the making of his work.  He tells me he does reference the tradition of masquerade in Nigerian culture in his practice, although less directly over recent years.  The reference was quite literal in early paintings made during his undergraduate degree at Coventry University, where the depiction of masked figures signified his heritage explicitly.

More recently, the notions of entertainment and performance that play out across his paintings and collages much more loosely embody a spirit of the masquerade. There is a visceral quality and intensity to Ugada’s work, evident across a growing body that hovers somewhere between figurative and abstract.  Earlier works such as the series I Will Light You Up (2018) are highly charged with a sense of unfolding drama – a movement, energy and air of danger that is intangible but undeniable. The latest series adds a trace of slapstick, a nod to the artist’s surreal sense of humour and his interest in those vivid but random moments remembered from dreams – often funny and amusingly inexplicable.

Having been introduced to Ugada’s work through Shoot Festival, I am looking forward to seeing how his practice develops. He is clearly an exciting new talent and one to watch over the coming years.

Craig Ashley is a curator and producer based in the West Midlands. He led the visual arts programme at Midlands Arts Centre (MAC) from 2009 to 2016. Notable exhibitions for MAC include By the Rivers of Birminam (2012), an important retrospective of the work of renowned photographer Vanley Burke, and Barbara Walker’s Shock & Awe (2016), newly commissioned drawings acknowledging the contribution of Black servicemen and women to British war efforts over the past 100 years. He is currently Director of New Art West Midlands, the contemporary visual arts network for the region.

New Art West Midlands is the Contemporary Visual Arts Network for the region. Our purpose is to strengthen and develop the contemporary visual arts sector in the West Midlands, creating defining opportunities for West Midlands’ artists and curators, and working collectively to safeguard the future of artists and our sector.