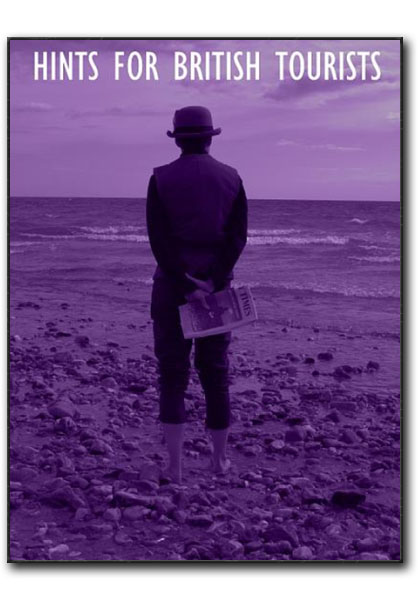 A figure in a bowler hat, waistcoat and rolled-up trousers brushes sand from their feet. They read a book in front of a painted beach hut, climb on rocks, clutch a newspaper, wait, fall asleep and look out to sea. In one moment after another, we see tourism performed and time laid out in photographic frames like film stills.

Coventry-based artist Denise Startin presents a series of site-based performative actions, seen here via photographic documentation. The genesis of the exhibition Hints for British Tourists comprises two chance encounters: the discovery of a tourism pamphlet on eBay (also titled Hints for British Tourists) and a wall plaque on Hertford Street, Coventry, dedicated to the historic watchmaking trade that lists craftsmen Samuel Vale and George Howlette. The exhibition represents a re-staging and fictional expansion of these two very different starting points.

Vale & Howlette are adopted as dramatis personae in a wider body of work by the artist, becoming primary characters in a narrative that explores ideas of travel, leisure, time and memory performed by Startin herself and her partner. Startin’s work makes enquiries, both serious and humorous, that question what it means to be a tourist in post-Brexit England, in a world grappling with a pandemic and climate catastrophe, in a physical body that requires care and rest, and in a landlocked city more than one hundred miles from the nearest stretch of coastline.

The original pamphlet purchased by Startin was published in the former Yugoslavia in the 1970s, intended as a practical guide for travel. In it, the author observes, ‘One of the reasons I like Britain and the British, apart from liking the Sunday Times, cheese cake, Constables in the Tate, ‘apples and pears’ and not to mention the liveliness of their pubs is because their idea of a holiday is not just lying around on the beach and drinking.’ Startin’s work offers more than a nod to this ambiguous description, providing viewers with perspectives on place that appear both familiar and strange.

While also introducing historic travel mythologies relating to legendary, often unreachable places, the titles selected by Startin for the photographs shown – On the Rocks; Between a Rock and a Hard Place; Rush Hour – also point toward emotional states of being in motion, conflict, indecision or, indeed, indicate a sense of stillness. Vale & Howlette’s journey is as yet embryonic. They are on their way to who knows where.

Denise Startin studied at the Royal College of Art and has exhibited work at Compton Verney, Coventry Biennial and Whitechapel Gallery, London. She is the recipient of multiple awards and bursaries and has completed artist residencies in Wrexham and the Lake District.